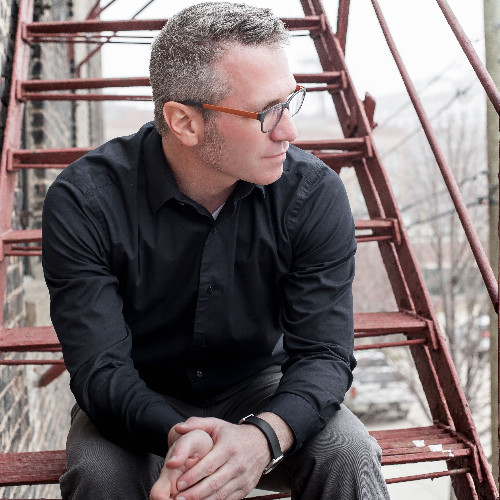 We are kicking off 2022 with a new feature on our blog, “5 minutes with…” starting with David Bradburn, the man behind Fork the Man Productions, LLC.

Whether he’s serving as a writer, producer, or director, Bradburn wants to do more than just make movies: he seeks partnerships with other local filmmakers to put Chicago on the map as the premier independent film-making city.

Bradburn’s films include “Home”,  “The Night Before The Morning After”, “Superhero Me”, a finalist in the 2012 Beverly Hills Film Fest Writing Competition, My Brother’s Other Mother ­– a documentary chronicling his younger brother’s search for his birth mother in the Dominican Republic, and  “The Coming of Age” which was written by Northwestern University’s Film Department Chair, Dave Tolchinsky. Bradburn’s successful launch into Chicago’s independent film community most recently landed him assignments with Kenmore and FOX.

What made you choose the creative path in your life?
For as long as I can remember, my mind was very active in the creative realms. It became clear to me fairly early that I was good with words and images, but not so good at drawing and most of my ideas were bigger than what I could pull off by myself. Eventually, this led to me making movies with my friends in high school. From there, things grew slowly over decades of work limited by time and resources. Eventually though, being creative is a mandate that my life puts on me and not the other way around.

What is your most memorable project?
This question is as hard as the last one. Each project has its own memories and challenges and lessons. As soon as I pick one, I’m reminded of another that is memorable in a different way. One of the things I think about most when I look at my body of work is how each piece reminds me of where I was at that point in my artistic journey and how my approach and morphed and what I’m thinking has changed and even the way I think about things has changed. It is always a thing where without the previous project, I don’t have the current one.

What drives you?
The need to create impactful art and to be an asset of positive change. I feel most alive and most comfortable in my skin when I am working with others to create something that we couldn’t create alone. This is true in the prep work to being able to work in a group. As much as the presentation portion of the process causes me anxiety, that is also where the culmination of all the tiny rewards along the way comes together.

What’s the best piece of advice you’ve been given?
“Just Write” I remember when I get stuck or the words don’t seem to flow to just do, and movement creates opportunity. I used to tell my students you can’t turn a parked car. So when I get stuck with anything I eventually find my way back to the words “Just Write” or some iteration of that. I have those words on my office wall to remind me that movement is the way.

Is there anyone that inspired you or impressed you recently?
So many, from my own circles to those with far greater reach than my own. Too many to mention. But, their work keeps me working hard to stay relevant and fresh.