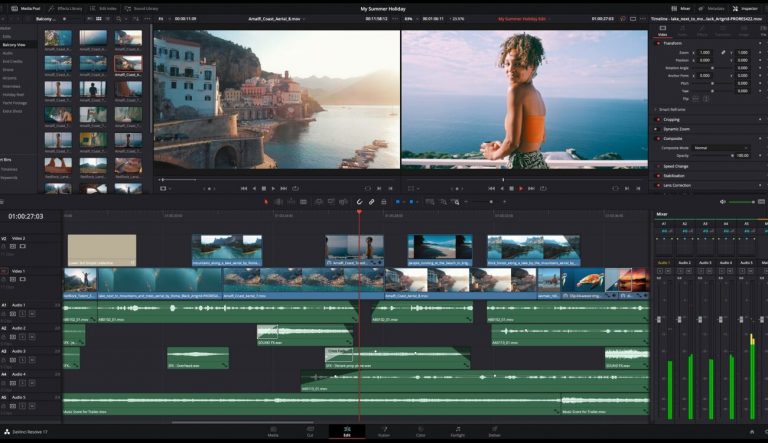 Blackmagic Design, the developers of DaVinci Resolve, announced a new update, DaVinci Resolve 17.4, that will bring a series of new features and, most importantly, have performance optimizations for the newly announced Apple M1 Pro and M1 Max chips.

Apple took the October event to announce their two newest Macbooks in the Macbook Pro range, moving at least ten steps up from their entry-level M1 Macbook range. The latest Apple Silicone chips M1 Pro and M1 Max, will be equipped in the new 14 inch and 16 Macbook Pro models.

Equipped with high-end spec, these two models will be a valuable addition to the world of videography and cinematography. Apple already made headlines with their M1 chip, where users received the opportunity to go to performance lengths since 2020. According to reports and initial reviews, we are in for something even faster and superlative.

The 17.4 update for DaVinci Resolve will help users exploit this superlative performance power.

As Apple’s keynote suggests, the Apple M1 Pro and the M1 Max will have faster processing and rendering capabilities. The M1 Pro will have 70% faster CPU performance than the M1 and provide 2X faster GPU performance.

Similarly, the M1 Max is expected to perform 4X faster than the M1 will soon be in the hands of video editors. With the M1 Macbook Pro laptop triggering a new wave of excitement among several creators, it will be only a matter of time that these units are set to replace the current Pro versions.

Firstly, the new Resolve 17.4 will bring hardware-accelerated Apple ProRes on the Apple M1 Pro and the M1 Max. The update primarily aligns the software with enabling users to take advantage of the M1 Pro and M1 Max machines. A wide range of opportunities await the user with the new chipset, and this update ensures every bit of performance of the hardware is absorbed.

Secondly, the native HDR viewers and the 120hz playback options are supported on the new Macbook Pro versions. The DaVinci Neural Engine performance now is faster on Mac OS.

Other features include quick and easy render set up in a place with dedicated Dropbox and Dropbox Replay presents, along with the addition of automatic background uploads that are monitored for status and confirmed once done.

For subtitling, the 17.4 update introduces automatic resizing of backgrounds and cursor placements when creating captions and nested timeline subtitle tracks, now auto-populating the main timeline to speed things up.

There are also minor improvements in the edit page, such as better functionality for position curves in the timelines, allowing users to adjust the ease in and out points quickly. This option comes in handy to provide a more custom transition from one point to another when you apply zoom or image position adjustments.

Users will also be able to use DaVinci Resolve Speed Editor to switch between cameras in Multicam clips on the edit page, making it faster to edit.

Additional support for asymmetrical trimming allows users to adjust transitions in point without affecting its outpoint or vice versa to fine-tune work quickly.

The new update adds greater support for automatic color management, making it faster and simpler to set up projects. There is support for ACES 1.3, which includes gamut compression allowing customers to display wide gamut images accurately.

A new Resolve FX custom mixer allows users to combine effects and adjust to grades with much better control than the previous version. The new 3D keyer adds the ability to make finer adjustments to the key and matte finesse settings to make it easier to create clean masks with more accurate keys and more refined edges.

Fairlight audio now supports Steinberg VST3 audio plugins with access to more audio effects to help users create better and more refined soundtracks. There are also keyboard shortcuts or click and drag to reorder, move and duplicate the effects in the Fairlight mixer with the update, displays denoting singe side audio transitions as fades with added support for multi-channel audio outputs.

Overall, the upgrade focuses on the added hardware support for Apple’s M1 Pro and M1 Max silicone. Through this update, the team at Blackmagic has introduced minor updates to make video editing more efficient than before.

With the new MacBook Pro laptops, the opportunity now opens up for creators to edit and color grade Blackmagic RAW 8k footage all on a laptop without making it to a studio. The team at Apple intends to make the new range of MacBook Pro laptops the only computer you would be using for editing purposes, regardless of the scale.

In such a situation, the update from DaVinci is only going to help in this whole process.

The full license for two users currently costs $295, but you also get free access to the Blackmagic Speed Editor with the purchase.